All for One is – primarily – a larp of the 1970s films. It is not a re-enactment, and although there’s a decent overview of the historical period on Wikipedia you’re better off watching the films again.

Ostensibly, you’ll be spending your time learning the ropes of musketeering, and being part of the social whirl of court. You can expect to be training, and dancing at a ball. As well as that, you’ll be on missions for the King, and off and about to your own purposes, foiling plots, that sort of thing. So you can expect to be inside, and outside.

And duelling, of course. It is recommended that you fight duels.

That’s the kind of thing you need to be thinking of dressing for.

All for a summary…

We’re already getting a bit carried away on Pinterest, so here’s the essence of the look. If you’ve images to add (or to check), then contact us and we’ll add them somewhere appropriate.

Baggy white shirt, doublet, big slashed breeches, and big boots. Whatever your gender, the look from the 1970s films is pretty much what you’re aiming at, although if you want to replace bits of it with a leather equivalent, go ahead. If in doubt, add more lace and you’re good to go.

We are providing a tabard in fine blue and magnificently embroidered musketeer’s regimental mark, and a cadre symbol to wear until you graduate or are cast out in disgrace. That on top of your budget base is the basic Cadet done.

Also known as a “Poet’s shirt” – it’s white, it’s got big sleeves, it’s a baggy look, so buy big. As Wikipedia sensitively puts it: “a popular style for … pseudo-historical costumes worn by Hollywood actors portraying characters such as swordsmen or pirates…”

Try eBay for this kind of thing.

As a rule of thumb, the further from the ground you get, the more impact you’ll get from spending more attention on your kit, and the more useful it’ll be to go beyond the budget look.

The clear winner for improving the basic Cadet look is a hat. Felt, wide brim, folded up to the crown on one side, and big feather is the iconic look, maybe a buckle on the front. Cheap hats like this are OK, get a different buckle and a better feather and you are on to something. 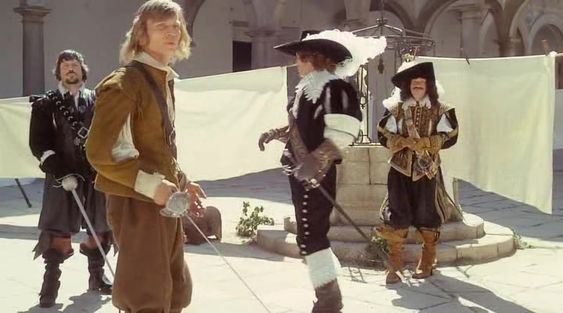 Over the shirt, maybe open at the front, probably quite plain, unless you are a peacock. (Of course, you might well be a peacock…) If you’re of a more military mind, you might be wearing a buff coat instead. 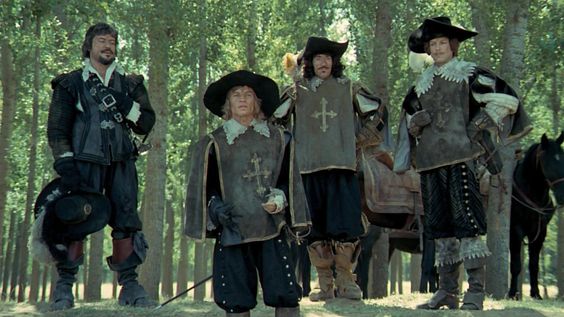 Better than joggers. Wool is good. Slashed is good, if you’re a peacock. 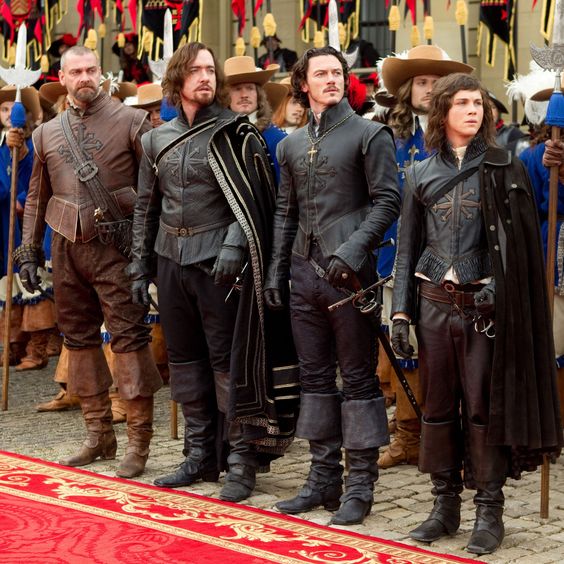 You want long boots, of course you do. You want them because you’re weak, and because you’ll look magnificent. Your first port of call could be boot tops to go over your basic shoes. Or if you’ve riding boots, or rigger boots already, you might be able to acquire some simpler boot tops to fold over the top of them to get the swashbuckling effect. Or you might have bucket top boots already, or yearn for an excuse to buy some. This is your moment. Or, for a UK-based seller, there’s the bucket tops at the bottom of this page. Or maybe these, on a lower budget.

But I need something for the ball too!

You don’t, you know. You’re a Cadet Musketeer, in which case you have the credibility to attend in your everyday gear and your tabard. Or you’re a Servant, in which case you’ll pass unnoticed anyway. But you might want something for the ball, and your character might too…

Note that we are providing masks for the ball.

If you want a change for the evenings, you’d be in the same basic garments as your day wear, but in finer fabrics, brighter colours, and more lace. Possibly much more lace.

Can’t I just make it?

I guess so? You’ll need patterns or something, then?

Do you you know where I can just hire it all?

Well, yes, but remember. This is a larp, not a fancy dress party. You’ll be spending some of the weekend outside.

That said – I bet Angels could sort you out, and if you explained there’d be some location work they’d know what to expect. (They probably did the original films after all.) I’ve no clue how expensive they’d be, but it will be expensive!

Script to Screen in Cardiff could probably help too, particularly if you’re passing through Cardiff on the way. Despite the slightly-fancy-dress appearance of their main website, they have shedloads of historical costume for TV & film too.

Sally Green will sell the entire kit to you, if you are that way inclined.